From high-street fashion to high fashion and high fantasy, how are the games we play shaping the society we live in? Whether you're a part of the PC master race or a console addict, you're part of a culture that is being increasingly influenced by games.

'Gamer' used to conjure up images of a guy sitting in his mom's basement wearing sweatpants and an ill-fitting T-Shirt (beanie hat optional). However, the gamers of today are shattering this image.

The global video game market is growing at a rapid rate, and it's showing no signs of slowing down. In 2018 the global video games market was worth $115 billion, and it's expected to reach $138 billion by 2021. Such a thriving market doesn't exist in isolation but rather catapults its way into other aspects of our culture.

This intense growth in the gaming market has resulted in a more diverse gamer landscape in which there is no standard for what a gamer looks like. Despite this, there's still an exclusivity to being a gamer. Gamers are passionate about the games they play, the eSports teams they support, and the culture that has risen out of it.

That's why the games of today like to pledge their support to their favored form of entertainment in the clothes they wear. That's what we're interested in.  Today we're going to look at how gaming culture has influenced fashion. Let's take a look.

JRPG: Who is Influencing Who?

and others, are known for the often outrageous character fashion. While fantasy games beforehand had largely focused on European fantasy lore concepts, Japan really made their mark on the scene with the release of the Final Fantasy franchise.

To call Final Fantasy popular would be a chronic understatement. The franchise has sold more than 147 million games worldwide, making it extremely commercially successful, but it was also critically successful, gaining recognition from game designers the world over.

While JRPGs did have distinct differences to European fantasy games in terms of world-building and story design, it was in the fashion of characters that they really set themselves apart.

Here's a hot take for you - European fantasy games usually come across...very European. The armor sets for characters largely resemble historic European armor like two-handed swords, metal helmets, and chain mail. Of course, there's some creative flair going on too - you're unlikely to find anything in a history book that's an exact match for European or American fantasy games. But it's fair to say that the fashion of the characters is evocative of European History.

Japan decided to take a different direction by bringing modern streetwear fashion into the fantasy game. Early Final Fantasy character designer, Yoshitaka Amano, was inspired both by the European Art Nouveau movement, and Japanese wood printing art and the subsequent fashions that followed it. 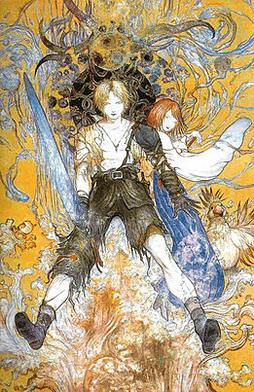 By Source, Fair use, Link

This is why you can see a distinctly Japanese flair in the early Final Fantasy fashions, complete with huge flowing robes and vibrant colors, despite the ropey graphics. Amano may have set the style in motion, but it really took off under his successor, Tetsuya Nomura.

Nomura built on Amano's style but brought his own influences to it, namely his admiration for Japanese streetwear.

In a statement to Bloomberg, Nomura said:

This merging of high street fashion and high fantasy is what gives JRPG their uniqueness, and what allows them to permeate Asian and Western culture beyond the confines of the screen. It's not just that Japanese fashion has influenced the character design in Final Fantasy, but Final Fantasy has also taken its place as a prominent part of the Fashion world.

What all of this amounts to is a flowing exchange of art between real-world fashion and game fashion that influences both. It's not a one-way transaction, it's a symbiotic cultural exchange that you can see when walking down the street in Japan.

The familiar long black jackets, layered black clothing, and silver jewelry are commonplace both in Japan and in Final Fantasy and other JRPGs. We're not at a point where the question "who is influencing who?" doesn't have a straight answer.

The eSports industry is huge right now. Despite being relatively new, the industry has been growing year on year, attracting major sponsorships, and becoming a prominent part of the global sports landscape. It's no surprise that eSports is now entering new markets, such as retail and fashion. One major example of this is the American eSports organization FaZe clan, who are opening a storefront on Melrose Ave in LA, a prestigious shopping location.

Why is this noteworthy?

Because although FaZe has been selling gamer merch such as T-Shirts, hoodies, and jerseys, on their online store for several years, it's the first time they're tried their hand at a brick and mortar store. You can bet that a company of their caliber hasn't made this decision on an ambitious whim - they've made the jump because it's economically viable. And it's economically viable because gamers want to shop for gamer clothing in the same way they shop for other clothing - on the street.

FaZe aren't going it alone in unchartered territory, but rather they are a part of the growing influence of eSports gaming culture in fashion. Louis Vuitton recently announced they would be partnering with Riot Games' League of Legends World Championship to design in-game outfits and a trophy carrying case.

This may seem like an unlikely pairing, but if recent sponsorships are anything to go by, collaboration with fashion companies is becoming the new reality in eSports.

In October 2019, sports brand Puma announced a partnership with Cloud 9 eSports. Another well-known sports brand, Champion, has also launched an eSports line that they describe as "made exclusively for gamers". Sports giant Nike has even moved into the eSports space, signing a four year deal with League of Legends Pro League, earlier this year.

This has all happened in 2019, and some of it only in the last couple of months, so we can expect to see more major sports brands moving into eSports in 2020 and beyond.

Even on a much smaller scale, in the last couple of years, we've seen an explosion in Game focused YouTube content creators offering their own lines of merchandise. This merch may not be displaying the copyrighted game artwork or slogans, but instead displaying images that connect with their gamer audiences.

There's a market for all of this - evocative streetwear, branded eSports wear, high fashion digital clothing, and small-time content creator made clothing. It's a way for gamers to become visible in our society and make their mark on culture, and the gaming fashion industry is thriving!